Release date: 18 April 2017 This stamp issue is the fourth in a five-year series commemorating World War I, each issue relating to the centenary year in which it is released. The five stamps in this issue, designed by Phil Ellett of Creative Ethos, highlight some key themes and events of 1917: the Australian Flying Corps, which entered the skies above the Western Front in 1917; the costly Third Battle of Ypres; the crucial support for the troops by an army of, largely, women on the home front; the Sinai–Palestine campaign, waged by mounted troops; and the work of war correspondent Charles Bean.

The stamps feature photographs from the Australian War Memorial collection.

At the outbreak of the war, aerial technology was still in its infancy and Australia did not have its own air force. It was, however, the only British dominion to contribute a flying corps. Over the course of the war, the Australian Flying Corps (AFC) sent four squadrons to support British operations during the war. The stamp photograph is by Oswald Hillam Coulson. It shows two Bristol Fighters of the Australian Flying Corps, travelling at top speed to reach their aerodrome before the gathering storm burst.

By the end of 1917, some 40,000 Australian soldiers had been killed or wounded on the Western Front, but this number was nearly doubled by the end of 1917: some 76,836 Australian casualties resulted primarily from the fighting at Bullecourt, Messines and in the Third Battle of Ypres. In fact, between July and November 1917 alone, allied troops lost half a million men in the Third Battle of Ypres – 38,000 of them were Australian. Taken by Frank Hurley, this photograph shows five Australian members of a field artillery brigade, passing along a duckboard track over mud and water among gaunt bare tree trunks in the devastated Chateau Wood, a portion of one of the battlegrounds in the Ypres salient.

$1 Support for the troops

Women volunteers are shown here in the Ballroom at Federal Government House in St Kilda Road, Melbourne, which was used by the Red Cross for the storage of goods sent in by local branches. They are sorting and packing items to be sent in parcels to troops. This was the location of the state headquarters of the Australian Red Cross, which formed in 1914, for some of the war years. Besides the Red Cross, many other local organisations and group provided support for troops at the front, and for returned soldiers. The 65,000 sheepskin jackets sent from Australia helped to keep the men warm. Volunteers also knitted thousands of pairs of woollen socks for use in the trenches. Soldiers were instructed to change their socks at least twice daily to help stop outbreaks of fungal trench foot.

During 1917, the campaign against the Ottoman Empire continued in the Middle East. The reorganisation of Anzacs after withdrawal from Gallipoli saw not only the redirection of troops to the Western Front but also the formation of the ANZAC Mounted Division, comprising three brigades of Australian Light Horse, the New Zealand Mounted Rifles as well as the Imperial Camel Corps. In total, five brigades of Light Horse served during the war. In 1916 and early 1917, they secured the Suez Canal and fought at Romani in the Sinai Desert. In 1917, they participated in the advance into Palestine where they fought actions at Gaza, Beersheba and Jerusalem. In 1918, they moved into the Jordan Valley, where they fought at Jericho, Amman and Es Salt, and ultimately entered Damascus later in the year. The stamp photograph by Frank Hurley shows the 2nd Light Horse Brigade passing over sand hills at Esdud, on the Philistine Plain.

In 1914, CEW (Charles) Bean won the Australian Associated Press ballot to become Australia’s official war correspondent, departing for the war in November 1914 with the first contingent of the Australian Imperial Force. The war would come to dominate Bean’s career and life: as well as writing dispatches from the front, he wrote the multi-volume official history of Australia’s part in WWI, he initiated the Australia’s WWI collection, and he conceived of the Australian War Memorial as place to house our national military heritage. During WWII, he again served through his writing, also working in media liaison for the Department of Information. Herbert Baldwin photographed Bean as he watched the Australian advance through a telescope near Martinpuich, France. The photograph was taken on 26 February 1917. 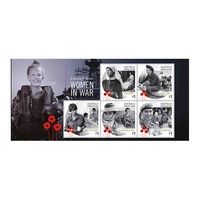 Australia 2017 Women in War A Century of Service M 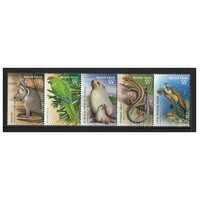